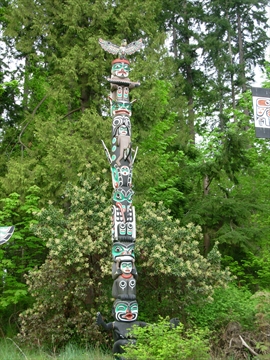 The Ga'akstalas Totem Pole one of the most colourful and intricately carved totem poles at Stanley Park.  On it are depicted many legendary people, such as Red Cedar bark man, and animals such as the killer whale, raven, and grizzly bear! 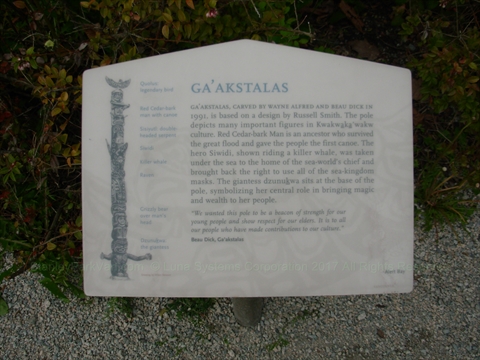 GA'AKSTALAS, CARVED BY WAYNE ALFRED AND BEAU DICK IN 1991, is based on a design by Russel Smith.  The pole depicts many important figures in Kwakwada'wakw culture.  Red Cedar-bark Man is an ancestor who survived the great flood and gave the people the first canoe.  The hero Siwidi, shown riding a killer whale, was taken under the sea to the home of the sea-world's chief and brought back the right to use all of the sea-kingdom masks.  The giantess dzunukwa sits at the base of the pole, symbolizing her central role in bringing magic and wealth to her people.

"We wanted this pole to be a beacon of strength for our young people and show respect for our elders.  It is to all our people who have made contributions to our culture." 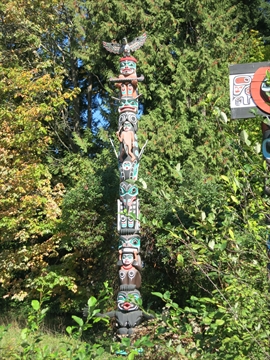 Where is the Ga'akstalas Totem Pole in Stanley Park?

The Ga'akstalas Totem Pole is located with many other Totem Poles in a display area at Brockton Point in Stanley Park, Vancouver, BC, Canada.