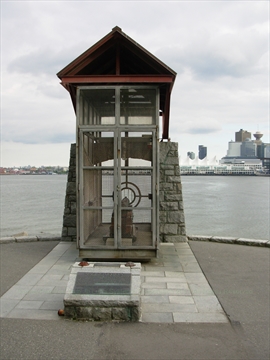 2022-03-01: UPDATE: The Nine O'Clock Gun is firing again nightly.  The Parks Board managed to get a new supply of black powder.

2022-02-10: UPDATE: The Nine O'Clock Gun will stop firing nightly tonight due to a shortage of the black powder required to fire it.  The Parks Board is looking at how to resume operations of it as soon as possible.

2020-09-08: UPDATE: The Nine O'Clock gun is again firing off nightly at 9pm. For a few months at the start of the Covid pandemic it was changed to fire off at 7pm in support of essential workers.

The Nine O'Clock Gun is a large old cannon that fires every night at exactly 9pm in Coal Harbour in Vancouver, BC, Canada.  This cannon has fired almost every night for about a century!  It is a Vancouver tradition and people still gather nightly to see and hear it fire!

The Nine O'Clock Gun has quite a history.  It has been kidnapped, has actually fired upon a floating fuel barge and has it's own Twitter account!

For a few months in 2020, the Nine O'Clock Gun was fired off at 7pm instead of 9pm in support of the essential workers who were working during the Covid pandemic. 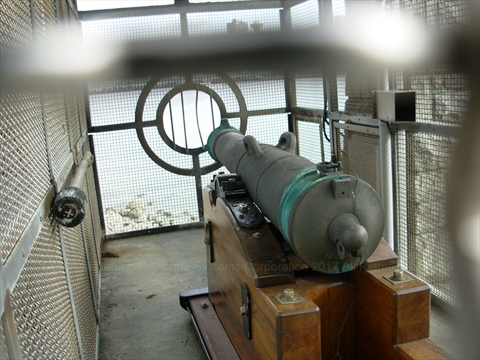 Originally, the Nine O'Clock Gun was located at the Brockton Point Lighthouse in Stanley Park.  It was manually fired nightly by the lighthouse keeper exactly at 9pm so that people could set their time pieces.  It was moved to the south side of Brockton Point in 1954.  In 1986 the cannon was restored and a new secure building was built for it.

On a few occasions people have put rocks into the barrel and they were fired out.  On one occasion a rock hit the sign of the floating gas station.  The new building is meant to prevent this from happening.

In 1969, the UBC Engineers 'kidnapped' the cannon in a stunt to raise money for the Children's Hospital.  See below for the complete story of the kidnapping and return of the cannon!

The Nine O'Clock gun also has it's own parody Twitter account that goes 'Boom' at 9pm every night! 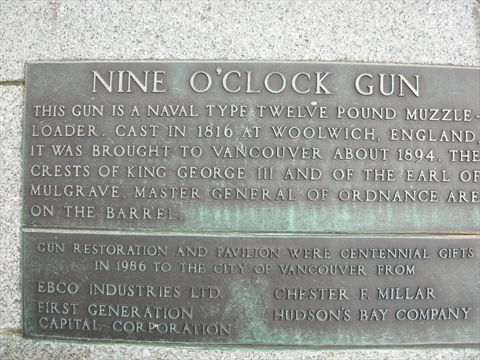 The plaque on the gun says:

This gun is a naval type twelve pound muzzle-loader.  Cast in 1816 at Woolwich, England.  It was brought to Vancouver about 1894.  The crests of King George III and of the Earl of Mulgrave Master General of Ordnance are on the barrel. 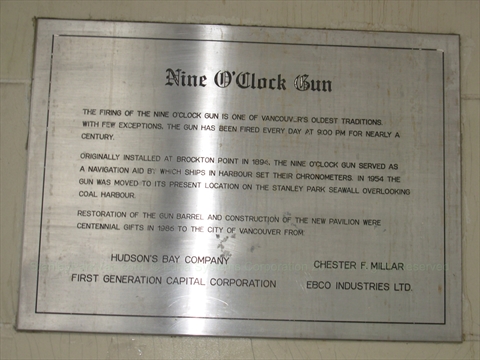 There is also a related plaque on the Hudson's Bay store on Granville Street in downtown Vancouver.  The plaque says:

The firing of the Nine O'Clock Gun is one of Vancouver's oldest traditions.  With few exceptions, the gun has been fired every day at 9:00 PM for nearly a century.

Originally installed at Brockton Point in 1894, the Nine O'Clock Gun served as a navigation aid by which ships in harbour set their chronometers.  In 1954 the gun was moved to its present location on the Stanley Park Seawall overlooking Coal Harbour.

Restoration of the gun barrel and construction of the new pavilion were centennial gifts in 1986 to the City of Vancouver From: Hudson's Bay Company, Chester F. Millar, First Generation Capital Corporation, Ebco Industries Ltd.

In 1968, in a meeting of the Greater Vancouver Pig Ranchers Association (aka a group of UBC engineers), realized that it had been about 5 years since (1963) the last great statue stunt and it was time for another stunt.  The UBC Engineers are famous for their not-so-legal engineering stunts!  It was suggested that the Nine O'Clock Gun be cleaned and shined as a public service.  It was scheduled to be done during Engineering week in Feb 1969.   It all started in January 1969, with local talk radio hosts bringing up a discussion about West End residents upset about the noise and the counter-acting cannon lovers supporting the Nine O'Clock Gun.  Also, the weekly engineering magazine was advertising for people with walkie-talkies or short-wave radios to contact the Stunts Committee.  So, some people knew something was in the works.  Finally, the group to pull the stunt was told to meet in the Lumbermen's Arch parking lot at midnight, Saturday, February 8, 1969.  Lookouts were stationed a the entrance to the park and on the Stanley Park Entrance overpass.  It was winter and there was some snow on the ground.  The group made it's way to the Nine O'Clock gun enclosure, removed the lock, disabled the firing mechanism, and removed the retracting pins to get the gun ready for removal.  As the group tried to remove the gun, they found out it was a lot heavier than calculated..somebody should have done their calculations better!  More people were called in and the 1800lb cannon was carried to the road and place into a pickup truck.  A fresh snowfall hid the footprints of the culprits!  The following morning it was discovered that the gun was gone and it was speculated that the UBC Engineers were involved in a 'gun-napping'.  The first night, the gun was stored in the shop of Pacific Power Systems.  The owner didn't normally go into the shop on Sunday, but happened to on this Sunday.  He had heard about the theft of the gun on the radio and was not impressed.  Imagine his surprise when he entered his shop and the gun was sitting there!  Knowing his son was an engineer, he phoned him at home and told him to get it out of his shop immediately!  The son did that and ended up driving around Vancouver in the pickup truck trying to find somewhere to stash the gun.  At lunch, they went to a White Spot drive in and much to their chagrin a police car pulled in next to them.  One of the officers noticed the red engineering jackets they were wearing and asked where the cannon was!  The engineers said that it was in the back of their truck.  The police officers just laughed, then drove away!  Finally, one of the professors of Civil Engineering received a knock on his door and was told not to look in his basement for a few days.  Even the RCMP were looking for the gun and showed up at the Engineering society office to inquire about the whereabouts of the gun.  The RCMP somehow missed seeing the chalkboard with a map of Stanley Park drawn on it with a big 'X' on it saying 'GUN HERE'.  On the Monday, the mayor of Vancouver received a registered letter (that had been mailed on the previous Friday) that said:
'Dear Sir, As you are probably aware the 9:00 gun has been kidnapped.  If the City of Vancouver wants it back a photo of our Mayor Tom Campbell, or a reasonable substitute should appear in the Vancouver Sun on Tuesday donating a hundred dollars to the Children's Hospital'
However, the major had been in the hospital and was still ill and the acting mayor Hugh Bird refused to pay!
That day, the annual Lady Godiva Ride happened and it included a long white box with the words 'Time of the tone will be 9pm' inscribed on it.
The following day, the Engineering Society president announced 'after some detective work' the engineers were close to finding the missing cannon!  He even showed a photo of the cannon on a garage floor.  The next day, Wednesday, had a story in the Vancouver Sun reporting that the engineers were combing garages across the city to try to find the cannon.  By this time, concerned citizens had given the mayor's office $1200 for the Children's Hospital.
On the Thursday, the engineer announced that the cannon had been found and that it would be returned at noon.  Hundreds of people went to Stanley Park at noon to see the cannon returned.  Many engineers, in their red jackets, came in a procession with a large black object.  This object was suddenly taken to the water and thrown into the water!  This shocked the onlookers thinking that the cannon had been dumped.  However, the object suddenly bobbed up as it was made of wood and obviously not the cannon!  The procession of engineers continued until a pickup truck appeared carrying the real cannon.  It was placed back into it's cradle.  And the cannon had been freshly polished!  Thus is the story of the kidnapping of the Nine O'clock gun.  Note: the above story was completely taken from the Engineering Society omitting the key names of those involved!

Photos of the Nine O'Clock Gun 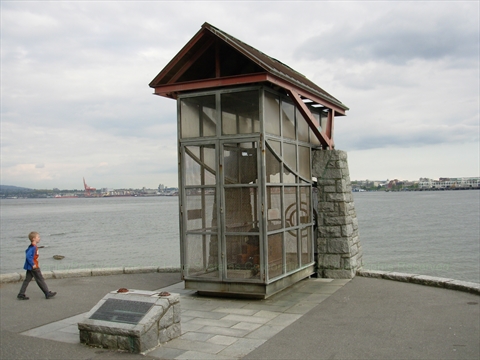 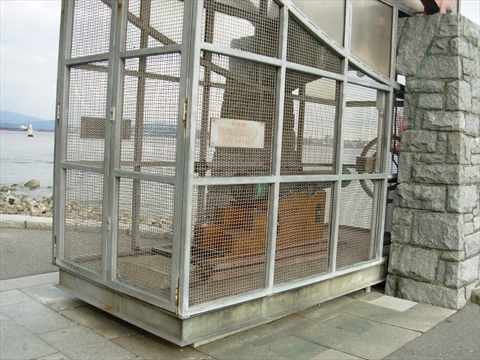 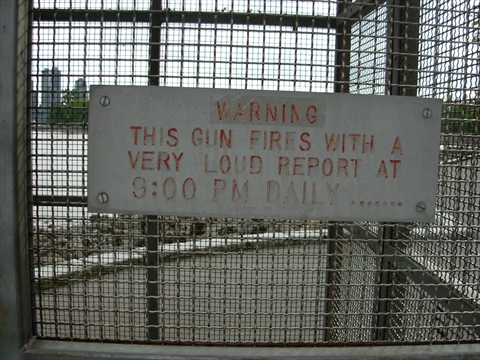 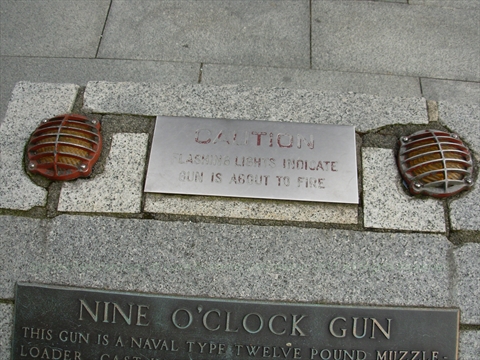 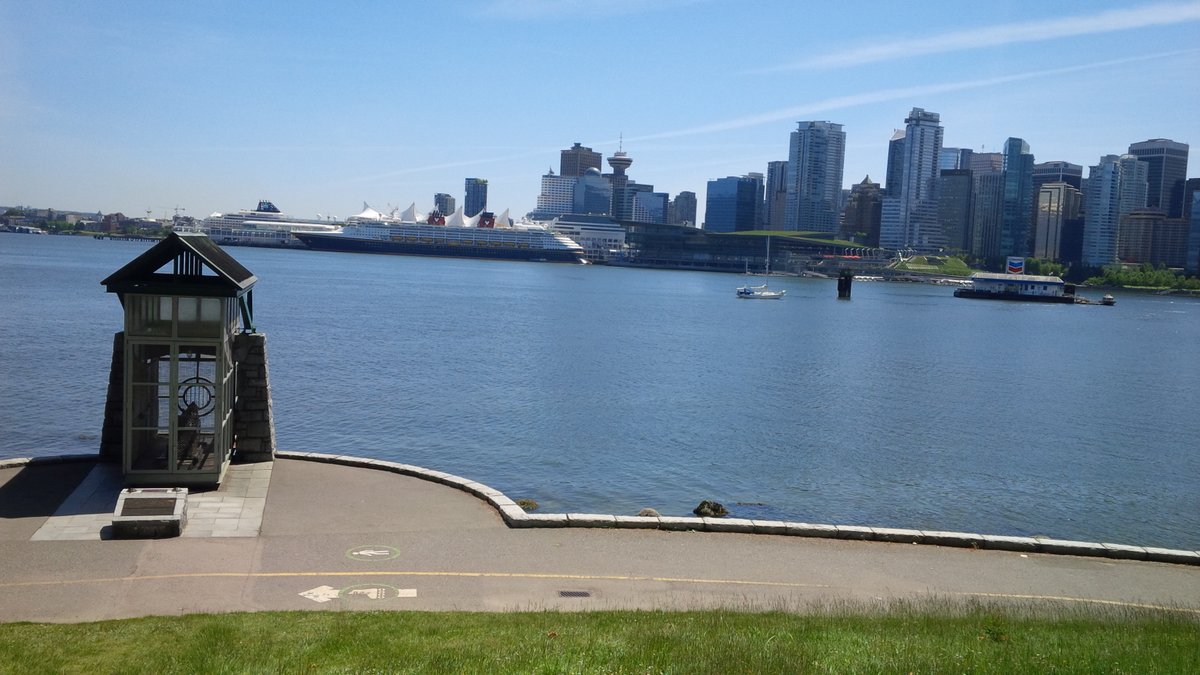 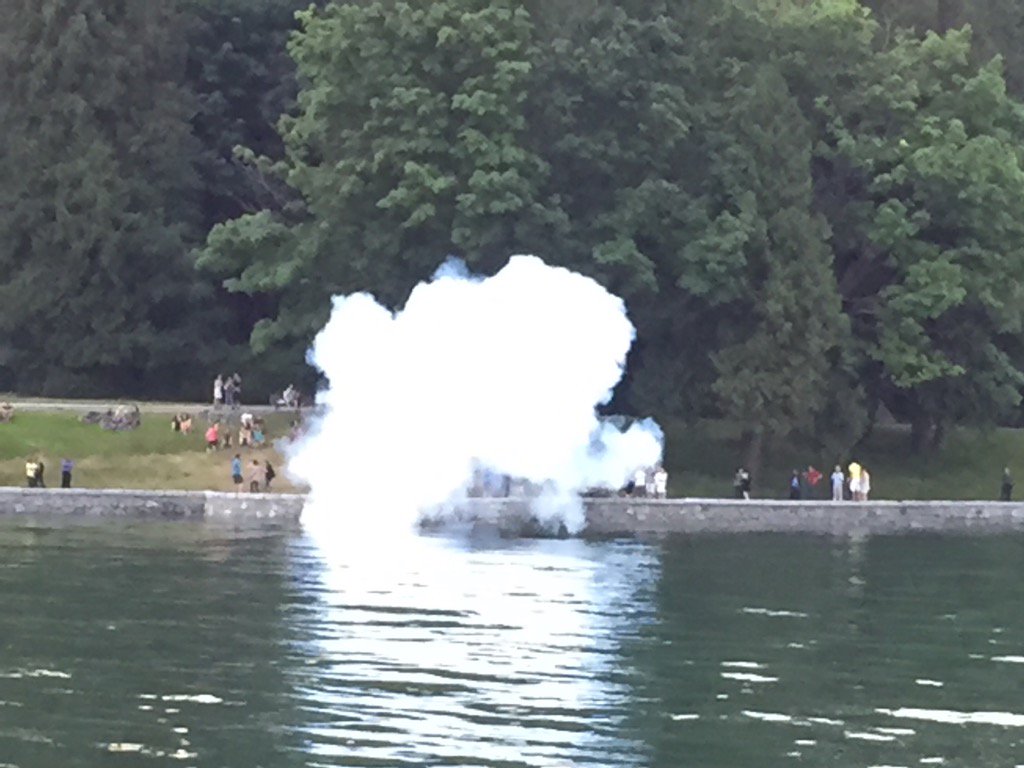 Where is the best place to view the Nine O'Clock Gun firing in Stanley Park, Vancouver, BC, Canada? 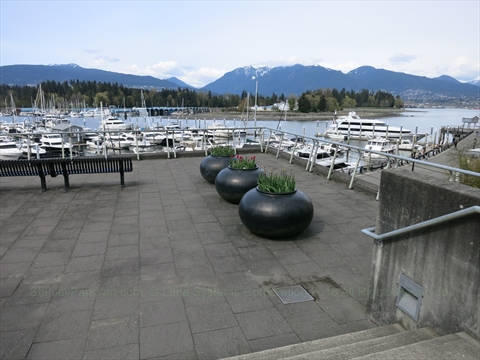 Where is the Nine O'Clock Gun in Stanley Park, Vancouver, BC, Canada?

The Nine O'Clock Gun is located on the south side of Brockton Point in Coal Harbour, Vancouver, BC, Canada.

What is near the Nine O'Clock Gun in Stanley Park, Vancouver, BC, Canada to see?

There is lots of things to see right near the Nine O'Clock Gun including the Harry Jerome Statue, Brockton Point Lighthouse, Totem Poles, and Coal Harbour among other attractions.

How to get to the Nine O'Clock Gun in Stanley Park, Vancouver, BC, Canada?

By Walking or Bicycle: From the end of Coal Harbour, take the Stanley Park Seawall) and continue on it until you reach the Nine O'Clock Gun.

Where to park for the Nine O'Clock Gun in Stanley Park, Vancouver, BC, Canada? 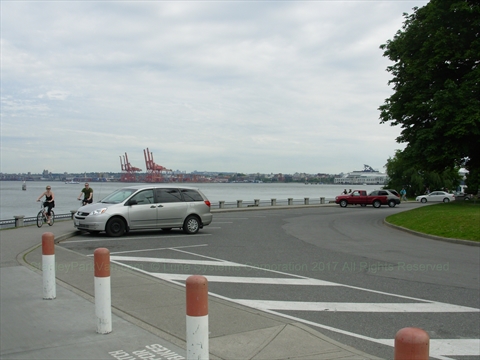 There is no parking lot right at the Nine O'Clock Gun.  The nearest parking lots are at the Totem Poles and Brockton Point Lighthouse.  For more information about parking see: Parking in Stanley Park.