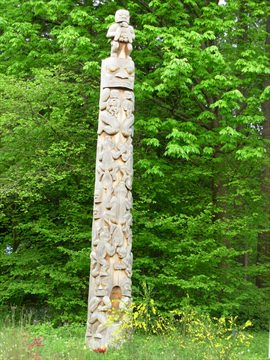 The Beaver Crest Totem Pole is a very unique totem pole at Stanley Park.  It is unique for a few reasons.  It is not painted in bright colours like most of the other totem poles are.  Also, it's main body is circular like the original log it was carved from.  It doesn't have wings or beaks or other items protruding from it as many of the other totem poles do.  The carvings are very intricate and tells the story of the Nisga'a family Tait. 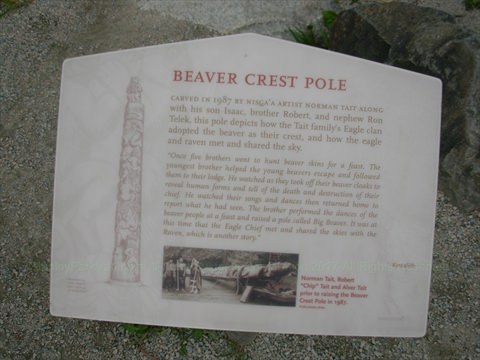 CARVED IN 1987 BY NISGA'A ARTIST NORMAN TAIT ALONG with his son Isaac, brother Robert, and nephew Ron Telek, this pole depicts how the Tait family's Eagle clan adopted the beaver as their crest, and how the eagle and raven met and shared the sky.

"Once five brothers went to hunt beaver skins for a feast.  The youngest brother helped the young beavers escape and followed then to their lodge.  He watched as they took off their beaver cloaks to reveal human forms and tell of the death and destruction of their chief.  He watched their songs and dances then returned home to report what he had seen.  The brothers performed the dances of the beaver people at a feast and raised a pole called Big Beaver.  It was at this time that the Eagle Chief met and shared the skies with the Raven, which is another story."

The caption of the photo says: Norman Tait, Robert "Chip" Tait and Alver Tait prior to raising the Beaver Crest Pole in 1987. 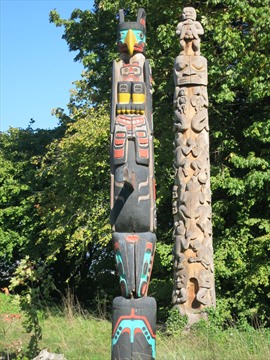 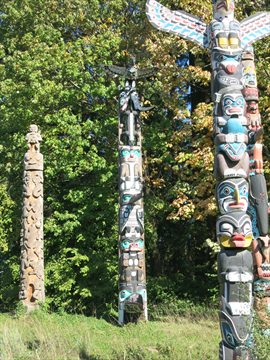 Where is the Beaver Crest Totem Pole in Stanley Park?

The Beaver Crest Totem Pole is located with many other Totem Poles in a display area at Brockton Point in Stanley Park, Vancouver, BC, Canada.