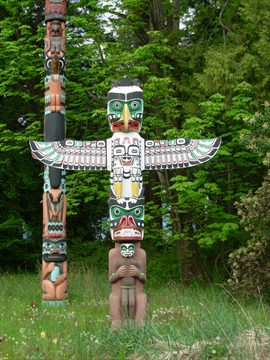 The Thunderbird House Post Totem Pole is a striking visual treat!  The colourful, open wings of the Thunderbird make it probably the most famous and favourite totem pole at Stanley Park. 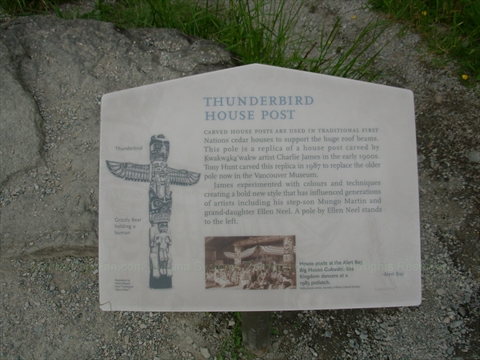 CARVED HOUSE POSTS ARE USED IN TRADITIONAL FIRST Nations cedar houses to support the huge roof beams.  This pole is a replica of a house post carved by Kwakwaka'wakw artist Charlie James in the early 1900s.  Tony Hunt carved this replica in 1987 to replace the older pole now in the Vancouver Museum.

James experimented with colours and techniques creating a bold new style that has influenced generations of artist including his step-son Mungo Martin and grand-daughter Ellen Neel.  A pole by Ellen Neel stands to the left

The picture of the totem pole has a Thunderbird at the top, then below that a Grizzly bear holding a human. 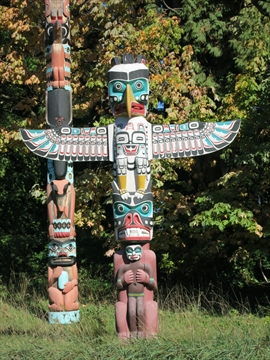 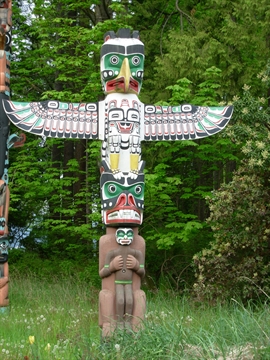 Where is the Thunderbird House Post Totem Pole in Stanley Park?

The Thunderbird House Post Totem Pole is located with many other Totem Poles in a display area at Brockton Point in Stanley Park, Vancouver, BC, Canada.